Want to discover how to generate results form your social media marketing? You’ve come to the right place!

How important do you find customer service?

Like me, I’m sure you would rate its importance very highly.

Let’s face it — the worst thing a company can do is ignore their customers. Especially now in the world of social media, it’s become even easier for customers to voice their opinions online, either to their friends or even directly to the brand or company themselves.

In this article, I’ll show you how STK Vegas used social media to turn my negative experience at their restaurant into a positive one, and the key learnings you can take from it to apply to your business.

Hungry for some great content? OK let’s get stuck in!

It all began earlier in the year in January 2014, when I had decided to go to Las Vegas with friends for a holiday. We booked our trip from May 16th to May 20th as we were travelling to another destination afterwards.

Before we set off for Vegas, we booked the restaurant STK in Las Vegas, which is so busy and that reservations have to be made 3 months in advance.
We made a reservation for the 20th of May, which was to be our final night in the city.

As you’d expect, as soon as we landed, the weather was great and people over there always seemed to be very welcoming. Maybe it was the accent but we were having a good time.

The 20th of May arrived, and as we were winding down for the day we were looking forward to the meal we had booked at STK Las Vegas that evening.

After arriving at the restaurant, it was clear to see how popular the venue was as the place was packed out. We gave the woman at the desk the name and were told to wait by the bar until our

This was when the waiting game began. With a restaurant this busy it was ok to assume that our table would take a little time to be called, but after 30mins we were still waiting, and were told our table would be called any minute now. So we patiently waited another 20 mins –nearly taking us to a full hour.

A friend then went to the desk, only to be told that we had already been seated. After revealing we were still waiting at the bar the woman just said, “Well, you can leave if you like.”

We couldn’t believe it!  At this point, we were finally taken to a table only to find they had placed us on a table for 4 when there were 6 of us. This evening was turning out to be a disaster.

I realised that with the restaurant being so busy the staff were not going to be any help. I knew I had to do something about this, so I began to search for the company on social media. Knowing Instagram is a mobile based application, at the time I felt that it was more likely the brand would see and respond using this medium.

Having found their Instagram account, I saw that the general manager of STK Las Vegas Jordan Mendez had recently won a “Hospitality Award” for his great customer service.

I used this opportunity to reach out to Jordan, first congratulating him on the award, then letting him know what we had gone through and asking if he could help. This was the perfect chance if any for him to demonstrate customer service.

After finally being seated on the correct sized table, we had begun to order our meal, when I received a notification on my phone that Jordan had replied on behalf of STK Vegas.

I thought to myself, “This is a good start.”  At least this time we were being heard. I then saw a smartly dressed gentleman approach our table asking for “Ravi.”

As he got closer and walked over to me, I realised this was Jordan Mendez himself. I took this opportunity to explain to him what had happened and how we had been treated.

He apologised on behalf of STK Vegas and the way in which we were treated, and finished by saying he would personally look after our group for the rest of the night and to leave it with him.

So I carried on eating, only to be approached 3 minutes later by the marketing manager for STK Vegas, who also wanted to personally apologize for the service we had experienced and said if we were to ever return to the STK Vegas or any other STK chain to let her know.

It was great that both the general manager and marketing manager had taken the personal approach to look into this for me. I felt this was a great example of how not only listening but acting upon the situation personally helped to reassure me as a customer.

After finishing my meal, I was approached once again by Jordan. He had mentioned that he understood we had travelled a long way and gone through the extra effort of making the reservation in advance. So in return he would like to “comp” the whole meal, giving it to us for free.

Now it was not my intention to get a free meal or a discount — it was more important for me that the restaurant acknowledge their error and apologise for the way we had been treated.

None the less, Jordan left by saying, “The meal is completely free, but if you would like to tip that is totally up to you.”

We were all happy with the food and most importantly the way STK Vegas and the staff had personally dealt with the matter at hand. As a result, we gave them a very good tip. I couldn’t finish the night without congratulating Jordan via Instagram and letting him know we were very happy with how he approached the situation.

Well done STK Vegas — you surely avoided being grilled! The personal approach and listening on social media absolutely made the difference between us enjoying the experience or never coming back.

Key lessons you can apply to your business:

Look to help your customers directly with their queries instead of passing them on to other departments or email addresses. 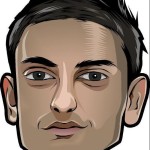